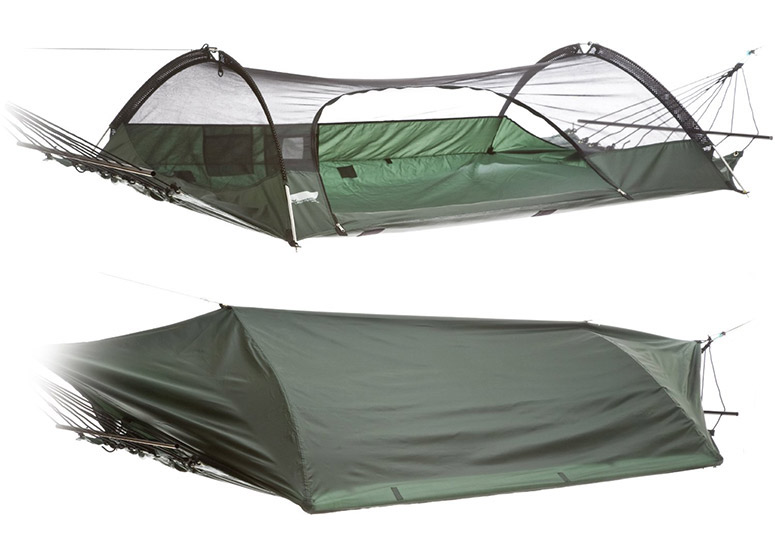 I’ve had a love hate relationship with hammocks for years. I love the simplicity of hammocks and being up off the ground. You feel a little bit more connected to your surroundings swinging gently in the air. But I’m a roller and just can’t get a good night sleep in the confines of a hammock. Sore back, numb feet and of course frostbite unless you insulate the bottom (that’s a bit of an exaggeration but not much). On my recent trip to Exmoor I knew the terrain would only support a hammock so I ordered the Lawson Blue Ridge in the hopes of finding a better night’s sleep. I found it.

The Lawson hammock is sort of a cross between a one man tent, hammock and bivvi bag. It can be pitched on the ground or suspended between two trees. It has a built in mosquito net and includes separator tent poles which opens it all up inside. A rain fly is included which wraps around the hammock. I probably won’t ever use the rain fly and much prefer a standard tarp in wet weather but it’s certainly a nice touch for such low cost kit. The hammock is extremely roomy – too much so really. I wouldn’t mind if it was a little bit more narrow to save weight. Pitched on the ground it could almost sleep two (albeit a bit intimately) so I guess it’s nice to have that option. The Lawson provides a flatter sleep than most other hammocks. Yes I know the diagonal Brazilian hammock technique but still find it too confining for anything more than a casual nap. In the Lawson hammock I can comfortably sleep on my side.

Many of the reviews online suggest the Lawson is tippy and I found that can be true if hung too tight. However, it can easily be guyed out from the sides to provide more stability. For me, the extra effort is worth the flatter sleep. The Lawson sleeps so flat, my Thermarest NeoAir works great inside even when suspended and that solves the insulation problem. In fact, my only complaint about the Lawson is the weight. It comes with powder coated steel separator bars which weigh in at hefty 835g. That may not sound ridiculous but as any hiker knows, every gram counts and the steel bars are such a waste considering every other component is so lightweight including the alloy tent poles. 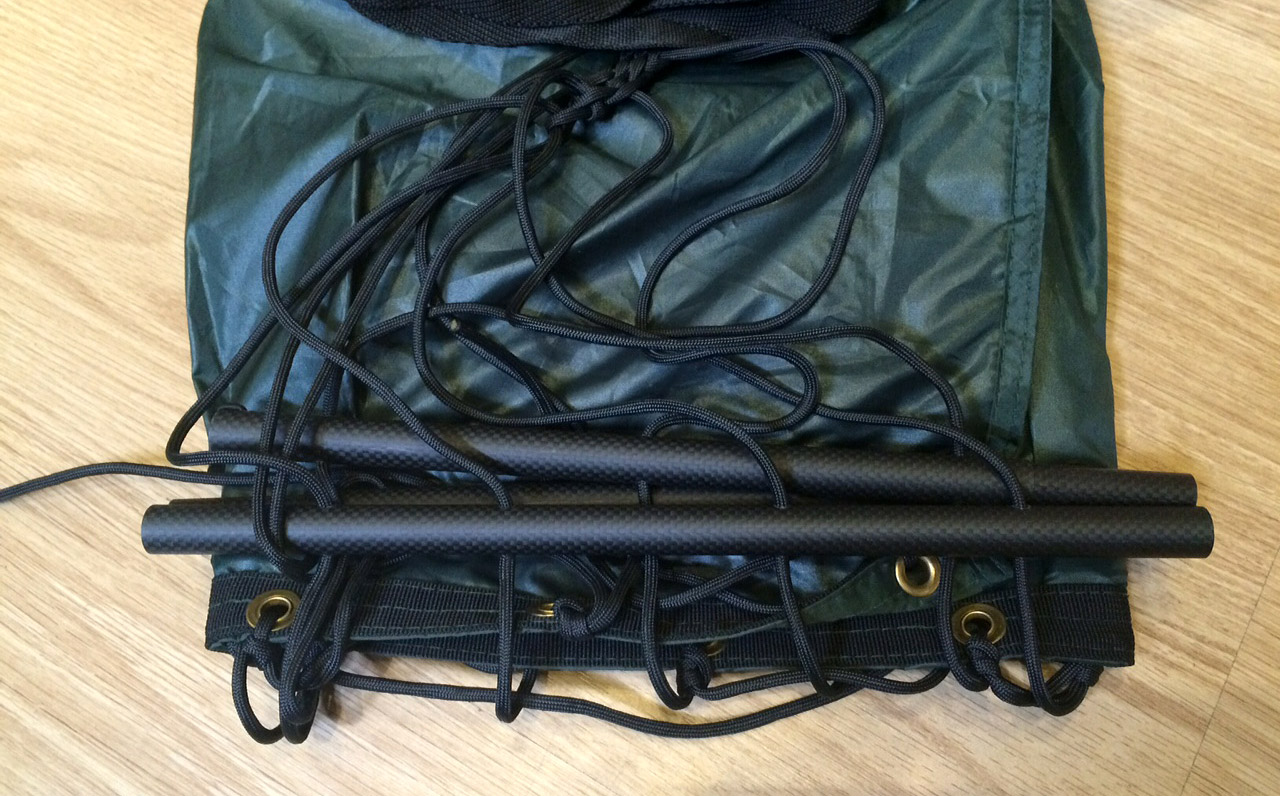 I decided to replace the steel separator poles with carbon fibre ones. Carbon fibre tubes aren’t cheap but I found some reasonably priced at hobbyking.com. I picked up 6x 330mm 16/14 tubes and a single 500mm 14/12 tube. I epoxied one side of a cut off of the 14/12 tube inside the 16/14 tube to create a collapsable join. The original steel pole had a single join so that the hammock could be rolled up in half. I decided to go with 2 joins (3 shorter poles per end) so that the hammock could be rolled up in thirds. This provides for a shorter, fatter pack which fits my rucksack better. I replaced the nasty nylon ropes with 550 paracord which also shaved off some weight. Topped off with aluminium rings, the carbon fibre pole replacement cut 650g off the total weight. 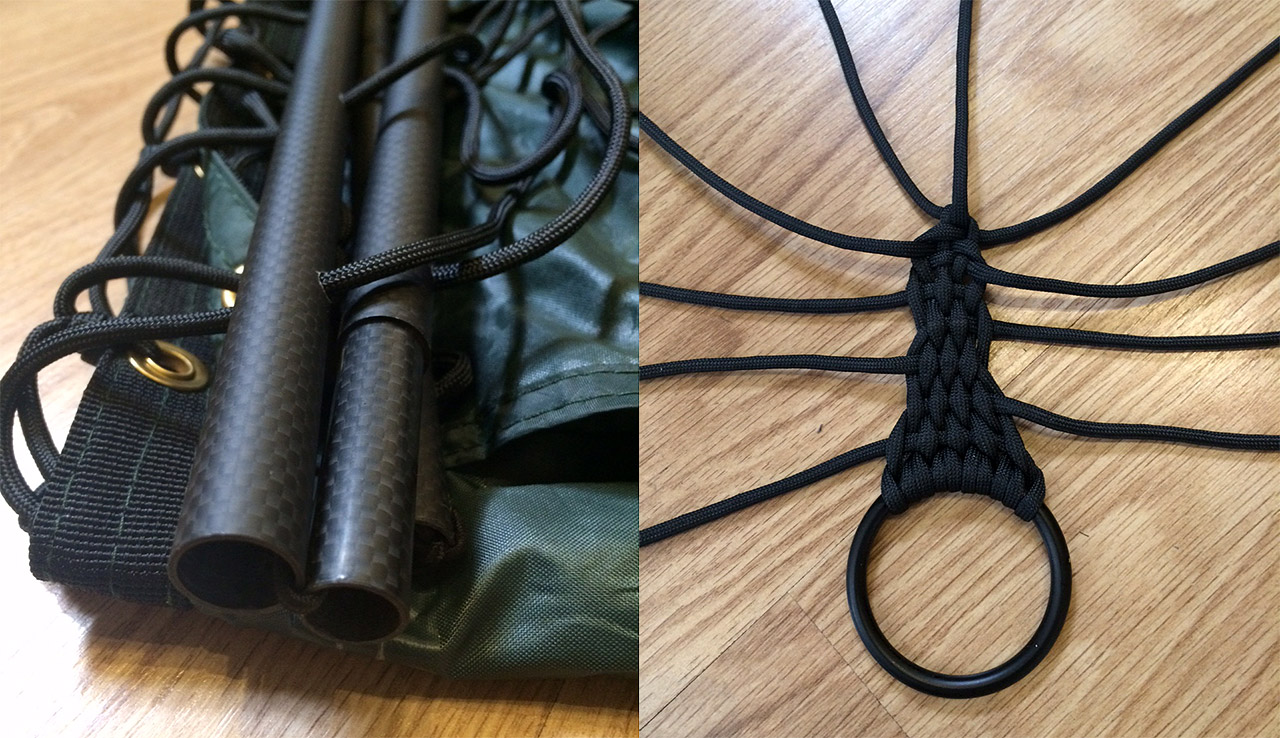 Here are some tips for anyone wanting to do this:

• Use a 4mm drill bit on the tubes for the paracord threading holes (use the old poles as a guide)
• The epoxied join inserts are inserted and extend about 50mm (100mm total). I used Gorilla Glue 5 min epoxy having first sanded the surface.
• Masking tape will help prevent the carbon fibre fraying when drilling/cutting
• I used a hack saw to cut off ends and a table drill to make precise holes through the centre (you could do this with a hand drill if you carefully marked and drilled from both sides)
• I purchased the aluminium rings off eBay. They are intended for making baby slings but are rated for over 2000lbs.
• Buy quality paracord. Not all 550 paracord is created equal. ebay is full of Chinese garbage.
• I used some 3mm bungie cord through the middle of the tubes (like tent poles) to prevent tangling but the joins were stiff enough not to require it.
• I like to use simple flat webbing for tree attachment as it does minimal damage to the bark. Don’t waste money on expensive tree huggers or heavy carabiners.
• I duplicated the traditional clew knot used on the original ropes. A guide can be found here.
• The alloy tent poles create a roomy space but aren’t required to maintain the integrity of the hammock (you’d want them for ground pitching). A couple of 1 foot sticks attached to a ridge line would also create plenty of loft inside and save another 230g.
• I’m using the DD Hammock SuperLight Tarp instead of the included Lawson fly sheet. The tarp weighs only about 100g more but is 3x3m and lets you function in wet conditions instead of hibernating in a cocoon.