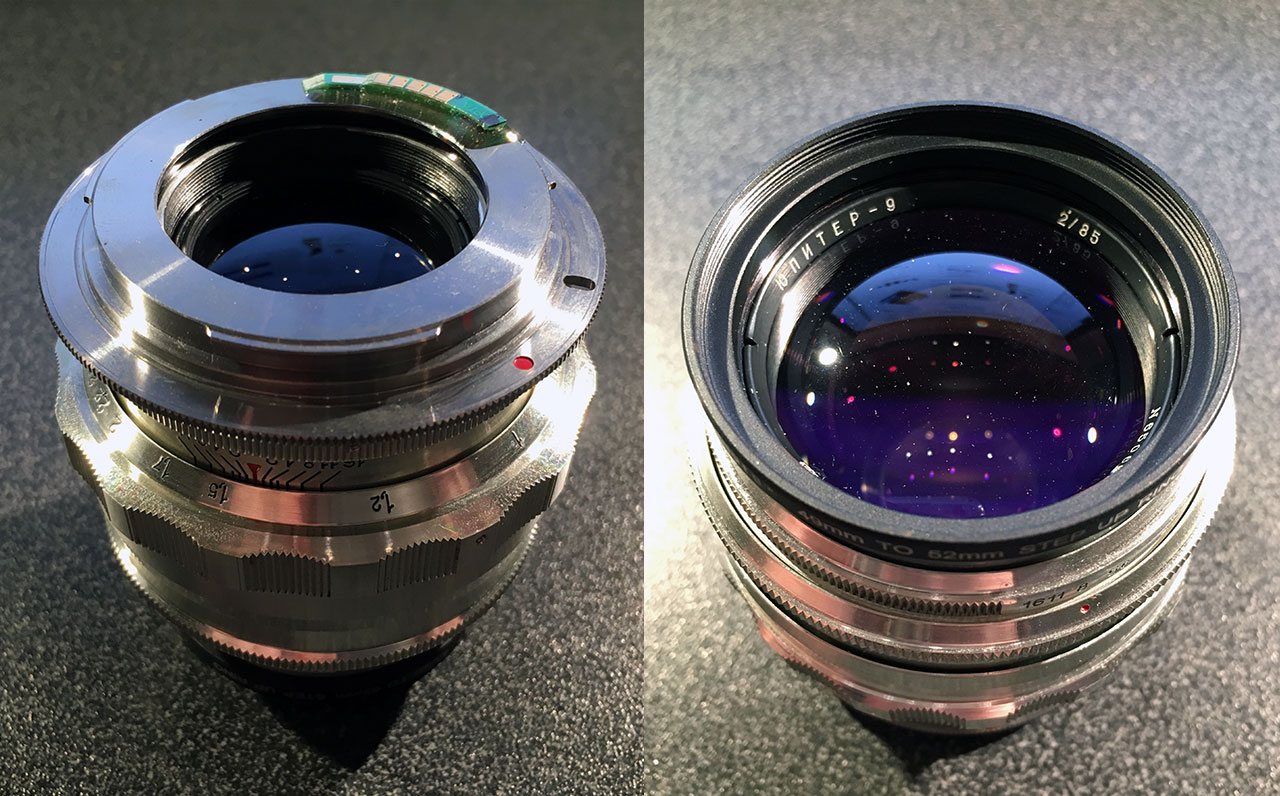 I’ve been casually looking for a good example of this lens for over a year. I really wanted something longer than the Helios for portrait stills and physically smaller than the Pentagon Six lenses I’ve adapted for cinema work. Jupiter-9 lenses are plentiful on eBay although generally in well used condition. I’m really pleased to have scored a near mint example straight from the motherland. This is a silver edition from 1965 that was originally made for the Soviet Zenit SLR. It’s an M39 mount that has a registration distance just a little off from the standard M42. It’s easily adapted with a threaded M39-M42 ring adapter (£2 off eBay) although the registration difference means that infinity focus may not be possible. My Helios 44-2 is also a silver M39 and has no problem with infinity focus, however, I can confirm that on my 5D3, the Jupiter-9 falls just short of infinity. It’s only a fraction out and stopping down makes it almost unnoticeable (see distant Big Ben shots in the gallery). The Jupiter-9 is a very soft lens anyway best suited for portraits so infinity focus is not much of an issue.

A copy of the Zeiss Sonnar design from the 1930s, the Jupiter-9 has a reputation for producing a soft, glow like look which was a popular glamour style in the 70s and 80s. This early silver example definitely possesses that trait. It appears to have a single lens coating and is less flare prone than the Helios although it does readily flare. It’s certainly not the easiest lens to shoot with. Even chipped for focus confirmation and with the precision matte focus screen in my 5D3, it’s a challenge to find focus at ƒ2. This is because wide open, the Jupiter has an extremely shallow depth of field which is what contributes to it’s beautiful bokeh. I’m used to shooting these vintage lenses wide open as it maximises the look and character, however, I found stopping down the Jupiter-9 to ƒ4-5.6 greatly increased the keeper rate while maintaining the characterful look. Its 15(!) aperture blades helps maintain a pleasing bokeh when stepped down.

This is a stunning lens to look through and to look at. Even while struggling to find focus wide open, it makes me feel like a photographer honing a skill. It is of the finest examples of mechanical engineering right up there with a quality time piece. It’s operation is so precise and smooth I can hardly believe this lens is half a century old. It looks like it was made yesterday and is an absolute privilege to shoot with. I did pay a premium for it’s condition (about £150) but I have filters that cost more than that. This is a lens I will treasure and pass down. I’ve never thought about any of my expensive Canon gear that way.

Here’s some advice about buying one. I like the very early versions of these vintage lenses which often come in a silver finish and have only a basic lens coating (flare is the look I’m after). Be very careful not to confuse these early M39 mount lenses for the rangefinder models designed for Leica which also come in M39. They are physically smaller lenses and have completely different registration distances which won’t work with a modern DSLR. You want to look for lenses designed for Zenit which was an early Soviet SLR camera. In fact, if you want to avoid the confusion and problems with infinity focus, instead look for a later Jupiter-9 M42 mount in a black finish. The first two digits of the serial number indicate the year of manufacture. Go for the earliest M42 model you can find in the best condition possible.