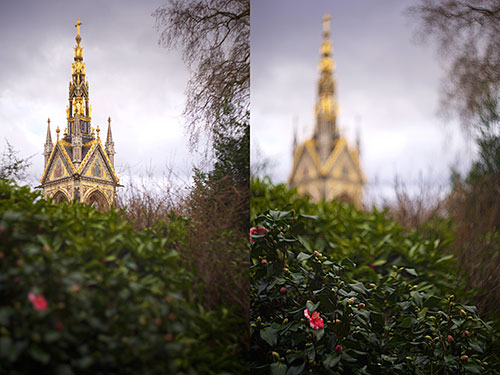 In my review of the Optix auto focus confirmation chip, I mentioned how most modern cameras use focus screens optimised for auto focus lenses and therefore lack some of the focussing aids found in older film cameras such as split prisms. I also said I was content using the focus auto confirm with my manual lenses but I’ve been growing more and more frustrated lately when the auto confirm fails to sound.

When Canon released the 5D mark iii one of the features they dropped from the previous mark ii was the ability to change the focus screen. I can’t say that feature ever hit my radar but how things can change in a year and now half the lenses I own are manual focus. Some enterprising 5D3 owners have found they actually can replace the focus screens with a 5D2 version even though it doesn’t quite sit in place properly. After reading a couple of reports of these screens falling out of place, I decided that wasn’t an option for me. Below is an excellent video detailing the installation (less the jungle soundtrack).

Fortunately, a better (more expensive) option exists for the 5D3. The enterprising folks over at focusingscreen.com have a huge array of focussing screens available for a wide number of camera bodies. My understanding is they file down the screen for a Canon 1D series to perfectly fit the 5D3. Installation takes about 10 minutes with the only difference over the 5D2 being a couple of small screws.

There was a bit of a dilemma choosing which focus screen would be best. focusingscreen.com have an outstanding comparison of the different types of screens. I vaguely remember using a film camera in my teens that had a split prism but due to the LCD overlays on the 5D3, I suspect the centre focus point would obscure much of the split prism. Furthermore, changing the screen has an impact on exposure metering and because I typically only use the centre point for focus and metering, a split prism would likely lead to unpredictable results especially in low light. I instead opted for the super precision matte or S type. There is a downside using this over the stock screen. The view finder is somewhere between 1 and 2 stops darker with the S type screen which is really designed for ƒ2.8 glass and faster. However, I’m pleased to say I don’t find this too much an issue with my ƒ4.0 Canon zooms and outdoors I don’t even notice.

While changing the screen has no impact on auto focus lenses, there is a slight impact on metering. With the 5D2 where changing screens is supported by Canon, the screen can be chosen in the menu settings which compensates for exposure differences. This can’t be set on the mark iii so I’ve noticed images are exposing slightly to the right (over exposed). This can be easily compensated for but in practice, I tend to expose to the right anyway which is best practice when shooting RAW so this has actually worked out pretty well.

What are the results using the S type screen with my vintage manual lenses? Outstanding! As in night and day. It’s amazing the difference this screen makes when finding focus. I can confidently focus now without relying on the auto confirm chip and having both the visual and audible feedback is the best of both worlds. At $90 USD vs the 5D2 version at $35 it’s not the cheapest solution but the difference seems trivial on a $3000 camera and not worth the risk otherwise IMO. focusingscreen.com could have provided better installation directions (I used the above video) but their kit was complete with tools, protective finger covers and the international shipping was quick. It has already become the best value modification (other than Magic Lantern) I’ve made to the 5D3 and highly recommended.