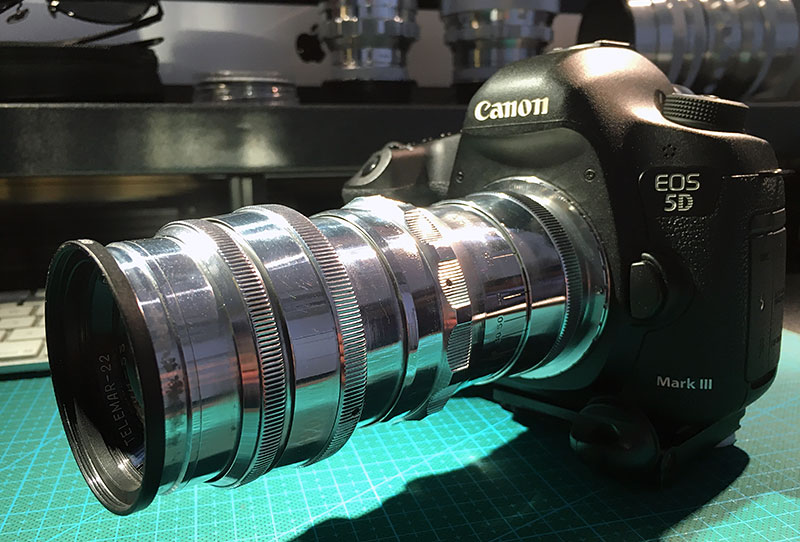 Having exhausted the faster, more desirable primes from the vintage Soviet M39 SLR family of lenses, I’ve set my sights on some of the more obscure offerings just to complete the collection. The Telemar-22 falls firmly in this category. At ƒ5.6, it’s the slowest of the early primes and for some reason, incredibly hard to find in decent condition. The signature M39 silver aluminium finish seems quite prone to oxidation and my copy is not perfect – but considerably less manky than the typical eBay offerings. It’s difficult to date this particular lens. The Telemar-22 had a short production run between 1970-76 and the serial number indicates it’s either from an early production series or simply doesn’t follow the standard first 2 digit convention for year of manufacture.

I’ll start with its greatest strength – size. It’s positively tiny compared to the Jupiter-6 with a small range advantage (200mm vs 180mm). It does this, however, at the expense of aperture. An aperture of ƒ5.6 is quite a sacrifice limiting this lens to use outdoors where good light isn’t a problem. It’s got a preset type aperture ring which is typical for these M39 lenses. I tend to shoot them wide open so I’m not particularly bothered with the strange preset control. It’s comfortable to handle and certainly looks the part. I expected infinity focus to be an issue on a Canon body but it worked without any modification using a standard M42-EOS adapter with M39-M42 stepper ring. It just goes to show how hit and miss the Soviet M39 infinity issue can be with a modern camera body.

There’s not much information out there and I found nothing confirming the optical formula. It’s unclear whether this has a Zeiss origin or something the Soviets came up with on their own. The look is reminiscent of a Sonnar. Princelle’s book says this lens was available in both coated and uncoated versions and I think that’s key to understanding this particular copy’s look. I noticed right away that the front element seems to be lacking any coating at all which results in an extremely low contrast, light washed image. It’s hard to avoid when shooting and a hood seems to make little difference. Only the front element lacks a coating which suggests this lens is not original and might have been parted together. Its mechanism is certainly smooth so it has been serviced fairly recently.

My expectations were quite low but this is a shy lens and slowly reveals an ability to capture images with a low contrast charm. I also like the focal length and it performs well with an attached 500 D diopter (see photos of the flowers in the gallery below). At ƒ5.6 it delivers a respectful bokeh but nothing special. It would lend itself well for portraits if it wasn’t for the minimum focus distance of over 2m. It means you can’t quite get close enough to the subject to take advantage of that 200mm crop. The light wash is also constantly present and gets in the way after a while. Unfortunately, its puny flare pattern does little to compliment the wash. I love these vintage lenses for their basic coatings but this just shows what an important role the lens coating has in modern lens design.

Overall, I was more surprised by this lens than expected. In some situations, it’s capable of producing a distinct vintage look. But to produce that look consistently is a challenge and the blown out white wash, which seems to concentrate in the centre of the frame, starts to get old, fast. Shoot away from bright light and it performs adequately (Albert statue below). Shoot into ANY light and prepare for your subject to disappear in a haze. It certainly conjures up an image from the 70s if not slightly over the top. It’s unlikely to get much exercise from me but it is a tick off the M39 list and another interesting example to explore.