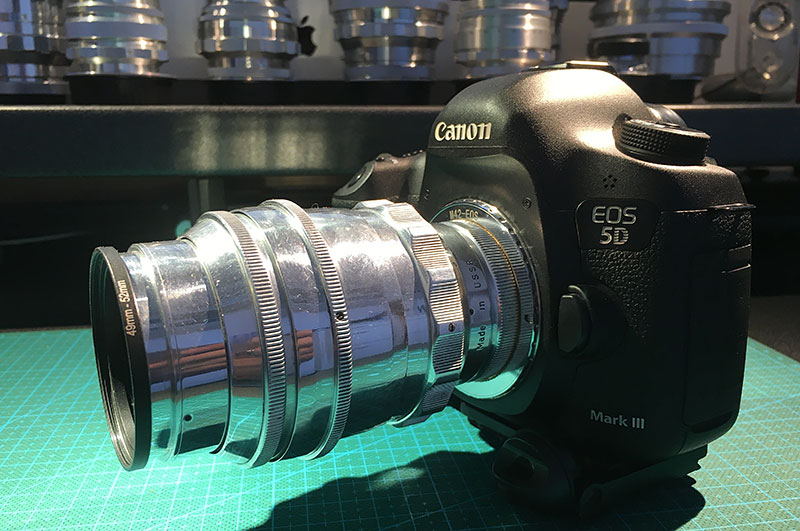 It occurred to me when comparing the Telemar-22 to the Tair-11 that I have not done a write up yet about this lens. I’ve owned it for about 6 months and it’s among my favourites within the M39 SLR family. I like it so much, I actually have two of them! To cut a long story short, it’s a fairly rare case of an eBay listing not being accurately described – specifically that the first copy I purchased was on the verge of seizing up. The seller in Russia was cooperative and refunded a portion to get it serviced. Getting that done in the UK, however, costs significantly more than in Russia, so it was cheaper to just buy another copy. I’ll probably crack the other one open to practice servicing these lenses myself but for now, I’m having more fun shooting with them.

Like the Mir-1, the Tair-11 was part of a group of lenses that won the “Grand Prix” award at the 1958 Brussels World Fair. That distinction would be engraved on the lens body of the silver M39 editions until they were revised years later to the black finish, M42 mount. Both my copies predate the badge and are in a shiny chrome finish instead of the more common matte finish. The silver Tair-11s don’t seem to follow the 2 digital serial number convention for year of manufacture but based on the missing badge I would date my copies at around 1957-9. A modified adapter solves the infinity focus issue on a modern camera body, without which the focus tops out at around 25m on both copies.

I couldn’t find anything definitive about the Tair-11’s optical formula but it looks and feels like a Sonnar derivative particularly with its buttery smooth, out of focus ‘bokeh’. The pleasing background blur is available across the aperture range thanks to the 20! aperture blades. That’s correct – 20 blades – ensuring a perfect aperture circle throughout the steps. You won’t find a modern lens with that many blades and it shows the Soviet’s intent, at the time, to be a major player in the field of photographic optical equipment. These lenses were being produced at a peak in Soviet industrial success, right on the heels of Sputnik, and the build quality is evident even to this day. I have no doubt that some fresh grease will restore my original copy back to perfect working order.

The image quality is everything I admire in a vintage lens. It has a beautiful, subtle warm flare which is readily achievable with direct light without overly washing out the image like the Telemar-22 is prone to do. It’s not as flamboyant as the Helios-44’s flare but then, that’s the Helios-44 specialty and why it stays tucked in the bag. This lens is about the subtlety of the image. It’s soft, but not overly so like the Jupiter-9 (which needs to be significantly stepped down to be reasonable). The Tair-11 is just soft enough to make people look better but sharp enough to pop when you need it. Lens sharpness is way overrated by ‘camera people’ anyways. It also exhibits a decent, balanced contrast, certainly rivalling a modern kit lens, but without sacrificing that muted, vintage tone.

At 133mm, it also sits within my favourite range. I tend to go for medium to long telephotos for the compressed depth of field they produce and the fact that they lend themselves well for capturing candid shots of people. For me, 133mm provides a good compromise between reach and portrait composition. On a cropped sensor camera body, the Tair-11 has an equivalence range of over 200mm and provides a convenient size advantage for a ƒ2.8/200mm prime lens (even if it is a bit on the heavy side). Personally, I much prefer the look on a full frame sensor where the Tair-11 is at its best.

The Tair-11 along with the Helios-44 and Mir-1 would be on my short list for someone wanting to start their own vintage collection. In fact, those 3 lenses are my ideal walk around set when I don’t need the specialty look that comes with some of their bigger comrades like the Jupiter-6 or Helios-40. The newer Tair-11A M42 mount would avoid the infinity issue on a Canon body but that model seems to demand a slightly higher premium on eBay. Either way, I don’t think you’d be disappointed.